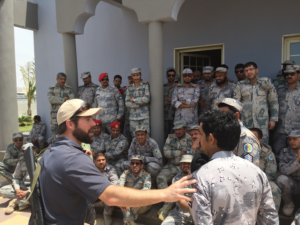 While in the United States Marine Corps, Brian served as a Marine Scout/Sniper with multiple combat deployments to the Al Anbar Province of Iraq during the height of counterinsurgency operations. As a Team Leader, he successfully led hundreds of both combat and training missions. During this time, Brian was meritoriously promoted ahead of his peers on three separate occasions due to his leadership capability and overall professionalism.

After being honorably discharged from the Marine Corps, Brian was hired by Cubic Applications to be a Tactics Analyst at the newly constructed Infantry Immersive Trainer (IIT) aboard Marine Corps Base Camp Pendleton. During his time at the IIT Brian trained and advised thousands of Marines on how to make better tactical decisions during highly complex and chaotic live fire training exercises. Under his guidance, thousands of Marines became more adaptable and better at sense making during highly stressful situations. While working as an instructor, Brian assisted with a number of scientific studies conducted by the Office of Naval Research (ONR) and Pacific Science and Engineering (PSE) in order to help determine the efficacy of the Infantry Immersive Trainer and the Marine Corps Combat Hunter program.

After several years at the IIT, Brian was hired as a security contractor for the U.S. Department of State High Threat Protection program. During this time, he was responsible for personally protecting hundreds of U.S. Government personnel in multiple high threat environments including Iraq and Afghanistan. Brian performed all major duties of a security detail to include leading numerous small teams on highly sensitive protection operations.

Brian was personally selected and trained by Mr. Greg Williams. Brian has worked alongside Mr. Williams on hundreds of operations and he has trained thousands of Soldiers, Sailors, Airmen and Marines in human behavior profiling and threat pattern detection. During this time, Brian has demonstrated both the ability and the adaptability to teach every different human behavior course that Mr. Williams has developed to include sexual assault prevention, suicide prevention, Insider Threat detection, and many others. Brian has trained hundreds of Law Enforcement Professionals to include US Border Patrol, DEA, ICE, TSA, US Marshals and other federal, state and local law enforcement agencies.

Brian holds a Bachelor’s Degree in Political Science, a Masters of Applied Psychology from The University of Southern California and is on the Board of Directors at Crusades 22, a non-profit organization combatting the veteran suicide epidemic. Brian is also an Ambassador for Carry The Load, a non-profit organization that provides an active way to connect Americans to the sacrifices made daily by our military, veterans, first responders and their families.