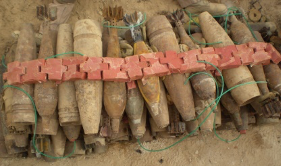 My friend Eric Collyer was leaving the inner Baltimore harbor. He hopped on the “2” heading south across the Patapsco River, using Hanover street.

He had recently changed gyms and was now returning home from the new one in Baltimore Harbor.

Collyer usually relies on his rote memory to navigate the roads for 20 or so minutes to get home as the route south to Glen Burnie was uneventful.

Today something was different.

There was a stiff wind coming from south to north, pushing across the factories that dotted the shores of Masonville Cove. One of these companies is Vulcan Materials, and the huge facility was cognitively close enough to the massive concrete processing plant in Al Karmah, Iraq to give Collyer a bout of the shakes.

Eric Collyer hardly ever calls and he rarely texts. When you get a message from him, it’s important enough to stop and listen.

He pulled over on a Baltimore street to talk as I pulled up a chair at RMW (Rogue Manor West) in Colorado to listen.

Back in the day, Al-Karmah Iraq was the most violent city on the face of the planet. Fallujah was bad, but Fallujah had walls. Walls that restricted movement. ‘Karmah’ was porous.

So much so that terrorists and their weapons and bombs could move in and out of the city unmolested. This allowed Karmah to become a FOB (Forward Operating Base) of sorts for Al Qaeda’s attack against US and Coalition forces in Fallujah and Al Jolan.

The Al Jolan district is ten minutes north of downtown Fallujah and leaves an impression on you. The masses of people, seemingly endless market place huts and tents and the surrounding densely packed subdivision became a recruiting boon for AQI.

Heights 600 miles west in the Levant. Al Qaedists used the ruse to import fighters worldwide to battle the US forces. Al Qaeda claimed that loyal recruits would be able to “face off with the Jews” to liberate “Golan”.

The Golan Heights were once located in the south of Syria. Israel changed that map in 1967 and the area is still a point of contention with anti-Semitic nations and forces.

How kinetic was this area of Anbar Province? I would ask Subject Matter Expert named “Teflon.”

Teflon’s unit (2nd Batallion/7th Marine Regiment) and his Coalition counterparts had an extraordinary amount of combat experience in the Fallujah area and an area in the Al Anbar Province known as “The Corridor.”

Teflon was “Mattis trained” and perhaps the perfect Marine for operations in the Levant. No Marine knows more about Karmah, Fallujah, Zaidon or Saqlawiyah than Teflon.

Teflon had been the G3 for the 1st MARDIV during the first and second battles of Fallujah. After that he was the boss of 2/7 deployed in and around Fallujah from July 2005 to January 2006 and again from January to August 2007.

During his tenure, Teflon’s unit had many run ins with the AQI (Al Qaeda in Iraq). In discussing the problembefore the Anbar Awakening, Teflon commented on the magnitude of the problem to an interviewer from the Institute for Defense Analysis:

“Before July 4, we had had over 100 real fights. I’m not talking about somebody throwing a round down range, or a random mortar, we had 100 direct contacts with enemy forces both 20th Rev and Al Qaeda”.

Later in that interview, Teflon related a story about the desperation of Al Qaeda in Iraq and their brutal tactics. AQI had conducted a raid during which they kidnapped and then murdered a local 12-year-old boy with ties to the Zobai tribe. Al Qaeda had attempted to create an environment on non-reconciliation by slaughtering the boy publicly and then hanging him to bleed out in a public place for all to see.

Al Qaeda drew a line in the sand with this heinous act – threatening AQI fighters who thought they could just leave the insurgency and return to a normal life with their Zobai tribal family.

coalition forces. The insurgents operating in Karmah were largely responsible for direct support to Al Qaeda during the Second Battle of Fallujah, channeling medical aid, bombs and small arms into Fallujah. Al Karmah finally fell during The Awakening when the Tribes decided it would be easier to survive alongside Teflon and the US and Coalition forces than it would be to live under the brutal control of the insurgency.

Just before Collyer (call sign Blackheart) arrived in Karmah, a 2005 VBIED (car bomb) attack at an OP (Observation Post) injured a group of Marines from 2/2, followed later by an IED attack on the vics coming in and out of 1/4 controlled Camp Donnica.

While Blackheart was on the ground, the US and Coalition forces tried to establish a police station in Karmah, it was attacked so many times that the Iraqi Police (IP) abandoned it. 2/2 took over the battered IP station turning it into a makeshift OP.

Early on, one Marine was shot and killed by an insurgent sniper and a full-on firefight ensued.

For 10 straight minutes a large group of insurgents descended on a squad of weapons platoon Marines pouring in fire small arms and RPGs. The Marines bravely and adeptly held off the much larger force until the arrival of a Marine QRF quick reaction force from another OP.

He and his USMC Scout Sniper team were working within and among the Iraqi Army and IP trying to quell the violence and pacify the wild west atmosphere of Al-Karmah.The insurgents picked up their game to counter the swell, increasing IED attacks and using complex ambushes and mortar attacks on the patrols in the area. Coming out of Camp Donnica meant dodging bullets, bombs and mortars with increasing regularity and accuracy.

Blackheart and the Marines around him were moving down a street when they took direct small arms fire. His team returned fire and Collyer dove to the closest cover, a dirt berm paralleling the street.

As Blackheart Collyer returned fire, he noted something hard kept poking into his chest and ribs. When the firefight ended, Blackheart had a chance to move to one side and observe the item that had been prodding him.

Blackheart seated on the left.

It was an IED (Improvised Explosive Device) made from a military UXO (unexploded ordnance) 155mm artillery shell. The triggering mechanism was hanging out, dislodged when the gigantic, shaved-ape known as Blackheart plopped down on it with his massive, sculpted Baltimore physique.

Speaking of Baltimore, that brings me back to Blackheart driving home from his new gym.

The northerly wind blew the smell of processing plants, sulfur, chemicals and manufacturing into Collyer’s olfactory receptors and the similarity to the combination of smells on that day at that time magically (logically, chemically) sent him back to that berm in Al Karmah.

“When I saw that artillery shell it scared the shit out of me. Then AND now. I’m sitting here shaking. Everything flooded back at once. My brain had locked that memory so fucking deep that I never thought about it again, until now.”

“What an atmospheric, I need a new set of panties.”

I reminded Collyer of my patent pending idea that ALL underwear should be brown. Saves a lot of time!

Karmah resisted pacification even after Blackheart’s unit rotated out.

This morning, Shelly and I did a training session for election workers. A short, intense training opportunity one of many we have done for the same group over the past months to make them safer, smarter, and harder to kill.

This morning’s central topics were detecting pre-event indications of violence or danger at the polls by determining Urban Masking and Social Camouflage.

Simply, something that a person DOES to conceal themselves, their identity or a hidden weapon would qualify as Urban Masking.

Something that a person SAYS to remain hidden, to ‘hide in plain sight’, would qualify as Social Camouflage.

The culprit who killed Max Galeai, Phil Dykeman and Marcus Preudhomme (as well as a large number of Iraqi citizens) was dressed as an Iraqi Policeman. He gained ACCESS because of his Urban Masking and then detonated himself during the Shura.

The bomb that Blackheart was laying on during the firefight in Karmah had been concealed in a rice bag, covered with dirt and garbage to ‘Mask’ it – to hide the fact that a piece of unexploded ordnance had been turned into a lethal, victim initiated ‘land mine’.

Witnesses (especially eye-witnesses) are faulty because memory itself is fragile.

Humans recall events not as a motion picture, with film rolling and a streaming video of the memory flooding back to you in its entirety, but as chunks. Colors, ideas, smells, partial thoughts and images which congeal and form based on the time of day, what you ate, how much sleep you had, your neurochemicals and subtle environmental influences that inspire or detract from the validity of your recall.

In Blackhearts’ recollection, the file folder which contained his run in with the Karmah IED contained the chemical smell associated with the explosive charge packed into the arty nose-cone. The manufactured detonator intended to kill Eric and his team.

That chemical smell was cognitively close enough to the heavy industrial smells that morning along Hanover street to dust off that repressed memory and create a strong enough recall, a “memory and emotion link” that was so robust that Blackheart had a physical and emotional reaction to it 14 years later.

Had he kept driving, he could have been a threat to himself or others on the road.

Post traumatic stress affects each of us in its own way.

Collyer and I were soon laughing on the phone, recalling other capers we had been involved in and swearing that those experiences almost killed us.

A benefit of training is that it allows you to revisit those risky, dangerous situations again, now with a winning strategy.

Just knowing that with your newly minted knowledge, skills, attitudes, aptitudes and abilities that you could “turn back time” and if given another chance, modify the outcomes of a situation in a positive manner gives you strength.

Training should allow for non-kinetic outcomes as well as tragic ones for poor decisions. A central theme among training and trainers must be that GOOD TRAINING changes behaviors. It can clear up foggy parts of memories, allow for a mental and psychological ‘do-over’ in many cases.

A scary memory that taught you a utile lesson.

Don’t let your PTSD, sad or bad experiences to ruin your life. Rather revel in the fact that your brain is so powerful that it can act as a time machine, transporting you back to a dirty side street in the Middle East 14 years prior.

Its okay to be scared sometimes. It’s actually healthy.

Collyer’s fine now, he’s looking for another gym though, perhaps one SOUTH of Glen Burnie!